Animal studies have shown that administering the precursor molecule nicotinamide mononucleotide (NMN) elevates nicotinamide adenine dinucleotide (NAD+) levels. Age-related NAD+ level reductions have been linked to a myriad of aging diseases including cardiovascular, neurodegenerative, and metabolic diseases along with reduced muscle function, which NMN supplementation ameliorates. So, how can we figure out whether NMN supplementation helps with these age-related conditions in humans?

Yamauchi and colleagues from the University of Tokyo released a non-peer reviewed journal article in Research Square showing that orally treating men over age 65 with 250 mg per day of NMN significantly increased their NAD+ levels and improved their muscle performance. Although there were no significant improvements in cognition, NMN supplementation partially improved the auditory capacity of elderly people. Findings from the study is adding increasing evidence that NMN supplementation results in healthy aging benefits seen in animals like rodents and can translate to humans.

“We report that supplementation of NMN for 12 weeks in healthy old men was safe, well tolerated, and significantly increased NAD+ and NAD+ metabolites in whole blood,” said Yamauchi and colleagues. “Additionally, NMN induced improvements in muscle strength and performance. Thus, chronic oral administration of NMN could be an effective strategy for the prevention of age-related muscle disorders.”

Taking NMN for 12-weeks is Well-Tolerated

Before Yamauchi and colleagues tested how effective NMN is at improving muscle function in aged men, the research team wanted to know whether taking it is safe. The research team looked at common blood chemistry measurements indicative of toxicity that included liver enzymes and markers of kidney function after 12 weeks of daily NMN usage. Importantly, the lab results were unaltered in the group of men who took NMN compared to those that did not, indicating that taking NMN is well-tolerated.

“This is the first study to report that NMN administration significantly increased NAD+ and NAD+ metabolites in the whole blood,”

Further analyses demonstrated that NMN supplementation improves NAD+ metabolism by promoting NMN’s conversion directly to NAD+ and the conversion of other NMN metabolites to NAD+ through a separate NAD+ synthesis pathway (the de novo pathway). These findings open up the possibility that NMN drives NAD+ production by activating more than one NAD+ biosynthesis pathway. 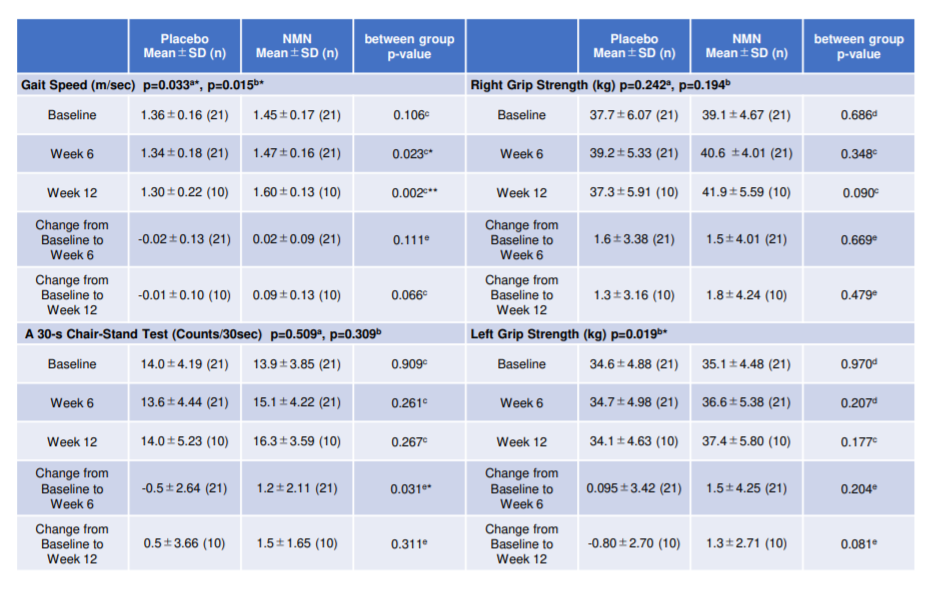 The study also concludes that “Additionally, our exploratory analyses of the effects of NMN supplementation on physiological functions suggest the ability of NMN to improve muscle strength, which is an important clinical indicator of aging.”

How Does NMN Improve Muscle Function?

Although these findings point to long-term NMN supplementation promoting overall muscle health, there’s no evidence as to how this all works. Nevertheless, there is strong evidence for NMN to be considered a clinically proven anti-aging agent, as this study is a promising indicator that some of the anti-aging effects of NMN seen in rodents may extend to humans.

What’s more, the 250 mg per day dosage used in this study has been applied in another study showing that NMN improves muscle insulin sensitivity in older women. So, 250 mg per day may give an effective dose in older people, but a study in Japanese men showed that up to 500 mg is well-tolerated.

It is important that the improved muscle function should come with added exercise and physical activity to delay or reverse the aging process. Joint health and other ingredients for extra stamina and strength will complement any NMN supplementation.